Paul Harnden Shoemakers Inspiration. I wanted to create a tribute to my inspiration by juxtaposing the modern and a past not so easily located.

I choose this image of a young man, Oda Shinfuku born to Tosa samurai father in Kochi Prefecture Sukumo Japan. This picture is believed to have been taken in Tokyo during the Meiji restoration in the late 1880s, while he was studying dentistry.

In the photo, Shinfuku is posing as the 16th-century daimyo Oda Nobuyoshi. His strikingly modern good looks and steely gaze strike me as a perfect compliment to the Paul Harnden Shoemaker brand. Quietly insistent beauty. 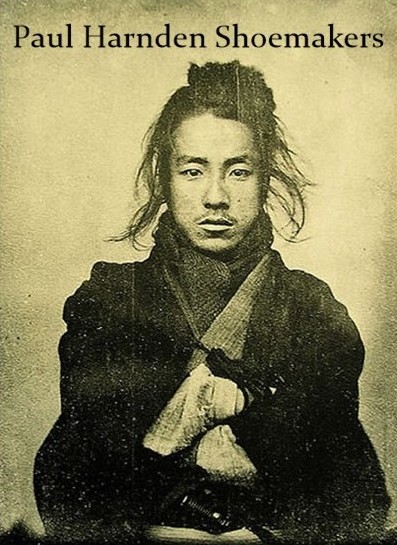 Inspiration comes in all forms. The designer Paul Harnden Shoemakers crafts beautiful, quietly meticulously clothes and shoes for men and women. One of the striking things about this company is the minimal amount of noise that they produce. The advertising is lean and when they do create a campaign the images are like someone speaking insistently but quietly causing you to lean in to hear.

Subtle as the clothes are they are often brimming with sartorial references and impeccable craftsmanship. Jacket lapels that can be pulled up and buttoned, shirts printed with images drawn from 18th-century botanical illustrations. None of it fussy or pretentious. For me, the clothes and the company’s aesthetics are brimming with inspiration. Shinfuku Oda and Paul Harnden Shoemaker. Inspiration and beauty.

By the way, the Oda Dental Office in Kochi that Shinfuku founded is still in operation more than one hundred years later.